Prospero's other blog is called Caliban's Revenge, where he writes about Film, Theatre, TV, Politics, LGBT Rights and just about anything that pops into his head on a usually daily basis. The Zombie Zone is Prospero's semi-weekly (or so) experiment that is All Zombies, All the Time.

Please feel free to leave comments, but note that they will be moderated before publishing, and comments deemed inappropriate will not be published.


Disclamer:
Warning: This blog contains footage and/or stills from films, graphic novels and video games which feature graphic violence and horrific images. And while I do not believe in censorship of any kind, this blog may not be suitable for children or those of a sensitive nature.

Now don't say you weren't warned. And I do hope you're hungry...

Blogs of the Living Dead

Links of the Living Dead

Followers of the Living Dead

Archive of the Living Dead

Prospero
I'm an actor, director, designer, playwright and screenwriter who has worked on stages in New York, New Jersey and Pennsylvania for over 35 years. I've done everything from ancient Greek theatre to Rogers and Hammerstein, Miller; Sondheim; Weber; Durang; McNally, Rudnick and Silver - though not necessarily in that order. I'm a gay man 'of a certain age,' set in my ways and unlikely to change any time soon.

Labels of the Living Dead

Wow. I would bet you thought Uncle P had given up on the ole Zombie Zone. And the truth is - I have. I just haven't made official until tonight. Running three (1 daily, 1 weekly and 1 seasonally) blogs is just too much when working full time while directing and acting part time (you'll have 3 chances to Uncle P actually perform in the upcoming season).
What Uncle P doesn't have time for is a weekly blog that seemed liked overkill. I can talk about zombies over at Caliban's Revenge any time I want. I don't need a special blog to do so.
And remember way back in the beginning when I said the Zombie Zone (originally "The Zombified Zone") was an experiment? I wasn't kidding. I wanted to see if I could find enough material for a weekly blog about  single subject. It was fairly easy, at first. But something really strange happened. A mid-century cult horror movie suddenly went mainstream and zombies were literally everywhere. And I'm sure Papa George never thought his little super-cheap indie horror movie would spawn a totally new sub-genre. I know he never imagined one the best television dramas of the Twenty Teens (I'm claiming that phrase if no one else hasn't already done so) would take place in the genre he invented.. 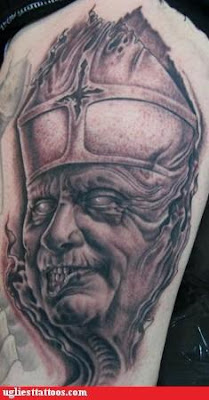 I know several of you already do, but please come follow me over at Caliban's Revenge. It's as much about zombies as it is anything else. I rant; review; critique; complain; analyze and explain movies; theatre; TV; politics; LGBT issues; family secrets; fun with friends and others; technology; travel; etiquette; personal issues; common issues; food and just about anything else I'm obsessing on at the moment, all with my own particular take on each subject, because I am nothing if not opinionated.
I thought I'd leave you with some of my favorite images I gathered for use on future Zombie Zone posts. Like that tattoo of Pope Benedict as a zombie. I guess it's well executed, but I don't understand. Can a monster turn into another kind of monster? It's sort of like getting a tattoo of Hitler in dominatrix gear. The horse is already... ah, never mind.
I loved trying something that looked completely different from Caliban's Revenge (which is undergoing some renovation at for the moment). I loved my custom colored keywords. Caliban's Revenge simply has too many tags to even try something like that - though maybe for some very specific tags). I liked finding odd and funny zombie clips, videos and trailers. As I'm sure you know - there's a lot of real crap out there, also contributing to the lack of stuff good enough to bothering embedding, let alone simply linking to. I could have spent the summer linking to AMC and their The Walking Dead dead teasers and updates, I suppose but I wanted to avoid spoilers. The ouster of Frank Darabont is cause for concern, though he set the bar so high, the cast and crew have no choice but to continue to deliver the goods.
And I will continue to cover and recap the show on Mondays at Caliban's Revenge.
I hope you've enjoyed the experiment while it lasted. I know I did. I hope you'll visit Caliban's Revenge.
I always have a good time there.

I won't be deleting The Zombie Zone any time soon, but I will no longer be posting anything here after tonight. Thanks for reading me. I hope you had as much fun as I did.
I will leave you with one final Zombie Clip of the week, as soon as I find one. BRB!

One of dozens like it, you say? Damn, you are hard to please...

Oh, I give up! Here's a stupid car commercial with a zombie:

No More, Ever (At Least Not Here)
Prospero
Posted by Prospero at 8:57 PM