Prospero's other blog is called Caliban's Revenge, where he writes about Film, Theatre, TV, Politics, LGBT Rights and just about anything that pops into his head on a usually daily basis. The Zombie Zone is Prospero's semi-weekly (or so) experiment that is All Zombies, All the Time.

Please feel free to leave comments, but note that they will be moderated before publishing, and comments deemed inappropriate will not be published.


Disclamer:
Warning: This blog contains footage and/or stills from films, graphic novels and video games which feature graphic violence and horrific images. And while I do not believe in censorship of any kind, this blog may not be suitable for children or those of a sensitive nature.

Now don't say you weren't warned. And I do hope you're hungry...

Blogs of the Living Dead

Links of the Living Dead

Followers of the Living Dead

Archive of the Living Dead

Prospero
I'm an actor, director, designer, playwright and screenwriter who has worked on stages in New York, New Jersey and Pennsylvania for over 35 years. I've done everything from ancient Greek theatre to Rogers and Hammerstein, Miller; Sondheim; Weber; Durang; McNally, Rudnick and Silver - though not necessarily in that order. I'm a gay man 'of a certain age,' set in my ways and unlikely to change any time soon.

Labels of the Living Dead

Best Zombie Movies of the Decade 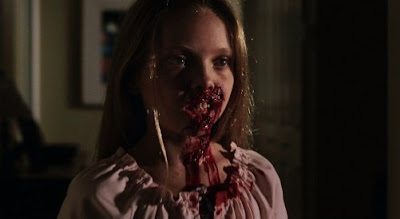 Since I'm doing "Best of the Decade" over at Caliban's Revenge, I thought consistency was a good thing and decided to bring it to the Zone.
Sadly, while there are lots of Zombie Films I haven't seen over the past 10 years, including Pontypool and Dead Snow, there are plenty I did see, and so this week's post is all about them. Let's get started, shall we?
10. Land of the Dead (2005)
The father of the modern zombie adds his fourth entry into the series with Land of the Dead, a story about the "haves" and the "have nots." Dennis Hopper is Kaufman, a guy who has set up a walled city in Pittsburgh where the very rich live in protected luxury while the poor struggle to survive in a post zombie apocalypse world. Simon Baker; John Leguizamo; Asia Argento and Robert Joy are members of Kaufman's scavenger crew, raiding outlying towns for supplies. When a zombie known as Big Daddy discovers the lights across the river, he leads a horde of the hungry undead right into the heart of Kaufman's "Zombie-Free" City. While not exactly as good as his previous efforts, Romero still manages to bring social commentary to his world of the hungry undead:


In this independent thriller, two disaffected high schoolers discover a young woman imprisoned in the depths of an abandoned mental asylum. It soon becomes clear that that she is one of the undead, but that doesn't stop them from selling her as a sex slave, with disastrous results. Creepy, weird and very original, Deadgirl is probably the most disturbing film on my list:


The original Spanish film REC places a young reporter with the night crew of a fire station, where their latest call is to a building where all hell has broken loose. The American remake Quarantine follows the same plot, but adds Hostel hottie Jay Hernandez into the mix. Both films are rather intense, feature a first person narrative and take a "rabies" approach to the zombie meme, though the original is just a little better.


Zack Snyder (300; Watchmen) reimagines Romero's classic treatise on consumerism as a balls-out horror movie, featuring an astounding opening sequence; lightening fast zombies and most repulsive take on zombie babies since Peter Jackson's Dead Alive. Below is footage that was shot, but never used.


A zombie film by default, James Gunn's hilarious Sci-Fi zombie movie concerns a small town under siege by slug-like aliens who tun their victims into hungry zombies. Gross and funny, Slither made my Top Ten Horror Movies of the Decade, as well. Slither is a treat for anyone who loves genre movies.


Romero's next entry in the genre he created is his first attempt at 'first person' filmmaking and tells the tale of a group of young University of Pittsburgh film students trying to make their way east during the zombie apocalypse. While not exactly up to the quality of Romero's earlier films, it manages to take a stand against more recent films that take liberties with the genre, while providing a couple of the best zombie kills ever.


Director Juan Carlos Fresnadillo picks up where Danny Boyle left off with this aftermath story about a man who is trying to live with the guilt of leaving his wife behind. When his children discover their mother still living, it triggers a new outbreak of the so-called "Rage" virus, practically destroying everything the military has done to control the outbreak. 28 Weeks Later also includes one of the most heart-pounding first scenes in film history.


Director Danny Boyle (Trainspotting; Slumdog Millionaire) turned the genre upside down with his film about animal activist do-gooders who unwittingly unleash the 'Rage' virus upon the UK population. Referred to as "The Infected," the zombies in Boyle's film are unapologetically fast and brutal, paving the way for new kind of zombie.


Edgar Wright and Simon Pegg take on the genre with their hilarious POV in this film about being stuck in a rut in more ways than one. Uncle P snuck away during a dance rehearsal for a terrible show he was stage-managing, to find himself the only person at the matinee who got the "We're coming to get you, Barbara" joke.

1. Zombieland (2009)
Using the lore from every Zombie movie that has come before, director Reuben Fleischer and writers Rhett Reese and Paul Wernick turn Romero's trope into the funniest and most effective Zombie movie ever made. Number 9 on my list of Best Horror Movies of the Decade, Zombieland is the best Zombie Film I've seen in the past 10 years, despite having its tongue firmly planted in it's cheek. Hilarious, gory and so very fun, Zombieland earns it's number one in spite of (and even perhaps because of) its use of 'Evil You Know Whats.'  Of course, the camoeo turn by Bill Murray may have something to do with it.